. . . to my web site. I've created it to share aspects of my work with those who have an interest in railroad and industrial history, in historic preservation, in railroad art and fiction, especially that written by railroaders, and in rail travel. Let me hear from you if you have a story to share or a question I might be able to answer,

Thanks for stopping by. 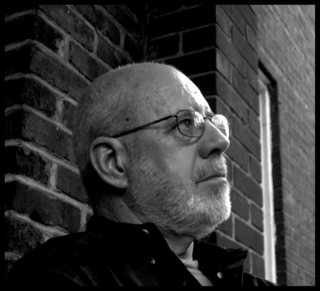 You don't even have to spend that much to learn what's on my mind from time to time. See my Author Profile Page and blog under any of my railroad book titles at Amazon.com, or click on Author's Blog in the Quick Links box at the lower right of this page. Thoughts, news, oddities; you name it and it might be there.

Along with the home team's batter scorching a two-out late-inning double just inside the left field line with the bases loaded to give his team the lead, and the look - and feel - of an old Boeing 727 at lift-off, author and columnist Jim Porterfield enjoys the timeless charm of a train ride and the satisfaction that comes from cooking. In two of his books, the long-running DINING BY RAIL: The History and The Recipes of America's Golden Age of Railroad Cuisine (St. Martin's Press, 1993), and the more recent FROM THE DINING CAR: The Recipes and Stories Behind Today's Greatest Rail Dining Experiences (St. Martin's Press, 2004), he combined these latter two loves to provide a detailed account of eating on the train. In each book, over 300 authentic recipes for dining car specialties past and present are accompanied by descriptions of rail travel, culinary practices and cuisine. What makes the recipes timely is the fact that they prepare high-quality dishes using a minimum of space, ingredients and utensils, generally in less than an hour.

Today Jim is at work on several projects, each with railroading and its history at the center. After overseeing a reprint of Harry Bedwell's THE BOOMER: A Story of the Rails (University of Minnesota Press, 2006), thought to be the best American railroad novel ever published, and for which he wrote an introductory essay and glossary, and compiled a bibliography of Bedwell's other work; and editing and introducing Jack Orr's acclaimed SET UP RUNNING: The Life of a Pennsylvania Railroad Engineman, 1904-1949 (The Penn State Press, 2001), a biography of Orr's father, O. P. Orr, he is now completing ON THE DOUBLE LINE, an anthology of railroad short fiction written by railroaders, set for publication in 2013. Meanwhile, he is at work assembling author-specific anthologies of the short fiction of such noted railroad writers as E. S. Dellinger and Gil Lathrop.

As a Contributing Editor for Railfan & Railroad, a magazine for North American railroad enthusiasts, Jim continues to write a monthly column on rail dining, compile a tear-out ANNUAL GUIDE TO DINNER TRAINS for the June issue, assemble PORTRAITS OF RAILROADING to illustrate how today's railroad artists portray a particular rail theme, and create SITE GUIDES TO AMERICAN RAILROAD HISTORY that take readers on a tour of locations across the United States where significant events in rail history occurred that also had an impact on America's history. He is building a website, THE RAILROAD TOURIST, where those interested in rail travel, history and preservation can find myriad places to visit that have some connection to railroading, from museums and excursions to rail trails, station restaurants, accommodations overlooking active rail routes, and more.

A popular speaker, Jim has been welcomed at gatherings as diverse as the Association of Railway Museums (ARM), the Tourist Railway Association Inc. (TRAIN) and the American Association of Private Railroad Car Owners, at The Children's Museum of Oak Ridge (Tennessee) and Amtrak's Chef Certification and Training Program, and among passengers on the American Orient Express and attendees at the annual Penn State Altoona Railroad Heritage Conference, which he organized and hosted. He has appeared both locally and nationally on radio and television to talk about railroad history, rail dining, and rail travel.

Jim was recently named Director of the newly-created Center for Railway Tourism, an academic and service resource for the railway heritage community that is affiliated with Davis & Elkins College in Elkins, West Virginia. There, he is creating new courses for the Recreation Management and Tourism major within the Business Administration Department, and developing materials and programs to support what is known as the Railway Heritage Initiative nationwide. Meanwhile, he continues to write and speak about railroad history, literature, movies, art and more. Finally, he notes that he's been a loyal patron of Amtrak since 1976, and became a skilled cook testing recipes for his articles and books about food.

The Railroad Tourist
A State-by-State Guide to Locations with a Connection to Railroad History, Travel and Preservation

Harry Bedwell's The Boomer
A Story of the Rails

Set Up Running
The Life of a Pennsylvania Railroad Engineman: 1904-1949